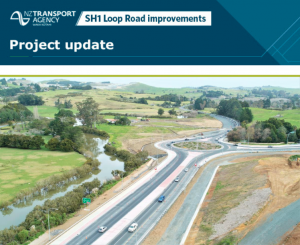 The remaining work including road surfacing and traffic island installation at the northern end of site will get underway soon and and we aim to be finished before the middle of this year.

Stage one of the project has taken longer than expected and, in this update, we want to give a bit more of an explanation around the remaining work, including the coned off area north of the roundabout.

This update also includes some details on stage two of the project, which involves the construction of a southbound taper lane on SH1 and a new bridge over Otaika Stream. We expect minimal disruption to state highway traffic on stage two as the majority of work will be completed beside the road, off the state highway.

We appreciate your patience as we work through construction of this project which, once complete, will ensure communities, visitors and freight travel safely across the state highway network south of Whangārei.

The Loop Road Safety Improvements has, like many projects, experienced delays due to the country’s ongoing COVID-19 pandemic response. Lengthy lockdown periods in Auckland for example, made the delivery of construction materials challenging and did impact the scheduled programme of work.

The final layer of asphalt at the roundabout and immediate approached was laid pre-Christmas. This work was carried out as nightworks to minimise disruption for commuters. Work was then paused over the Christmas and New Year period to enable holiday traffic to flow more freely. The remaining completion works for stage one, including road surfacing and traffic island installation at the northern end of site, is scheduled to be completed by June.

Waka Kotahi also identified an issue with the surfacing on the northern end of the site which was laid earlier in 2021. Depending on the type of road being constructed, different pavement mixes are often needed based on the volume of traffic travelling on it, along with the type of vehicles whether it’s largely freight, oversized vehicles, or general traffic.

Like when baking a cake, all the necessary ingredients were present when the surface was laid, but the mix wasn’t quite right, and it has taken a bit of time to understand the best way to resolve the issue.

It’s important that we get this right as this section of the state highway is such a critical part of Northland’s transport network.

We’re very close to confirming the best solution and expect to get to work soon, with the aim to be complete with a fully operational site by mid-2022.

A more detailed schedule of work will be available in the coming weeks and the community will be updated again at this time. 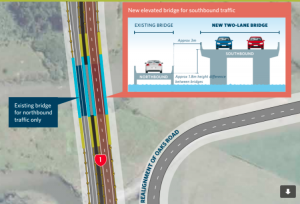 When construction of the new roundabout commenced in March 2019, our contractors were tasked with delivering a single-lane roundabout, plus additional earthworks, foundations and culverts, to ensure the roundabout could be increased to two lanes in the future.

Towards the end of 2019, Waka Kotahi approved additional funding to bring forward the construction of the larger dual-lane roundabout.

Increasing the Loop Road roundabout to two lanes means an additional southbound lane is required on SH1 as well as a new bridge to accommodate the additional lane. The new bridge and lane will ensure southbound traffic exiting the roundabout have a safe distance to merge back into a single lane before Portland Road.

The higher bridge structure means right turns into, or out of, Oaks Road will not be possible. Northbound and southbound lanes will be separated by a centre wire-rope barrier. We have constructed a safe turning area on Portland Road for Oaks Road and SH1 residents to make right turns.

Construction of stage two will begin later this year with work to strengthen the ground where the road will be constructed. This process, called ‘preloading’, works by slowly compressing the ground surface to create a stronger foundation for holding the road and vehicles. This process can take up to six-months.

While construction for stage two may not be completed until 2025, we expect minimal disruption to state highway traffic than stage one as the majority of work will be completed beside the road, off the state highway.

It will only be the taper lane ‘tie-ins’ at the roundabout and south of Otaika Stream that will require traffic management, and this won’t be programmed until later in construction.

We’re in the process of firming up the project timeline and will have more detail to share in the coming months.

For more information on the SH1 Loop Road improvements, contact us at northlandproject@nzta.govt.nz

About the Author: Terry Brock